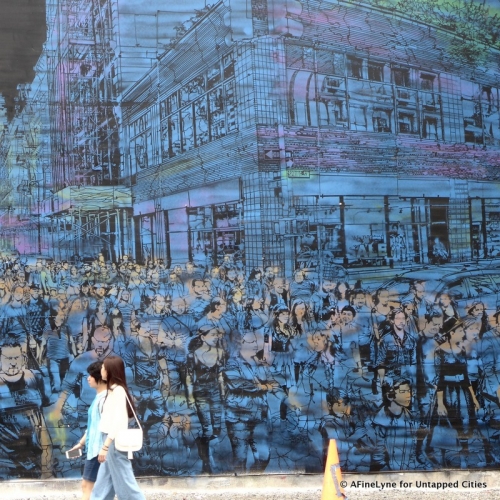 All summer, we have enjoyed a plethora of new outdoor murals throughout our five boroughs, but none is more hotly anticipated than the next artist up on the Bowery Wall. Artist Logan Hicks, known for his intricate stencil murals, will be creating a seventy-foot-long mural entitled “Story of My Life.” He began the project by inviting friends, family and fans to Greene Street in Soho one afternoon, where he asked them to simply walk down the street. Perched high on a ladder, he took hundreds (or was it thousands) of photographs that he would ultimately composite into one. The images include people who have most influenced his life during his ten years in New York, now clearly in view within his mural.

He began the complicated stenciling process on the Bowery Wall on July 25th, during some of the hottest days so far this summer. But shortly after applying several layers, torrential rains hit our area, and destroyed his work. The wall had to be prepared to begin again.

When we heard that Mr. Hicks’ restarted the mural this week, we decided to get a sneak peek at how it was coming along.   We were delighted to see how far the project had progressed. “Story of My Life” is due to be completed by August 28th. We will share the completed mural photos in our September Art Installation Roundup. View Mr. Hicks’ “Allure of the Sea” in the Lower East Side, and reconstruction of a shipwreck off the High Line last year.