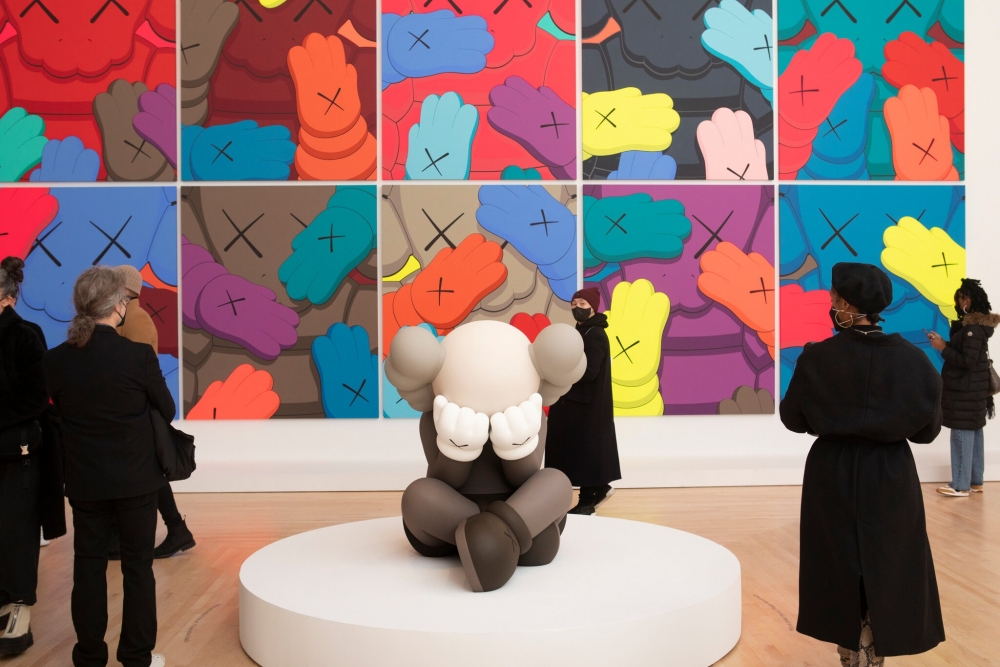 Marshall McLuhan suggested art is whatever you can get away with. Warhol, who was so expert at appropriation that the quote is often attributed to him, proved McLuhan right. Since then, many artists have accepted the idea as a personal challenge, draining appropriation of its thrill. Entire fashion companies are predicated on it. People like what they know.

Brian Donnelly, 46, who has worked as KAWS since the mid-1990s, figured that out early on. He got his start colonizing walls and billboards in his native Jersey City with his kinetic graffiti tag, spray painting lettering that alternated between jagged and bloated (the word “KAWS” has no deep meaning; Donnelly chose the letters because he liked the way they looked together). Somewhere along the way, he became a market heavyweight, a favorite of both street-art enthusiasts and high-octane collectors.

“KAWS: WHAT PARTY,” a fast and tight survey of Donnelly’s 25-year career, opening to the public Friday at the Brooklyn Museum, is perfectly titled. Donnelly’s dominance is near total — his sullen sculptures guard Midtown office lobbies and waterfront condos and have been launched into space — so it’s somewhat surprising that this is his first major museum survey in New York, a coming-out party after the fact. Much of that delayed reception has to do with the prickly feelings his work generates institutionally, where the artist’s acid-colored output is regarded as the ultimate triumph of bad taste. That position is probably overblown, or at least incomplete.

“WHAT PARTY,” curated by Eugenie Tsai, includes 167 objects in total. It begins with Donnelly’s early street work, which is the most interesting on view. By the late ’90s, he had landed on his visual language, trading in his lettered tag for a cartoon figure with X-ed out eyes and puffy crossbones plunged through its skull, which he applied to fashion ads in phone booths and bus shelters around New York. It was a less soured offshoot of the Situationist critique popular at the time among groups like the Billboard Liberation Front, which altered outdoor advertisements (Camel cigarettes, for example) to reveal their insidiousness. Donnelly’s interventions are mostly apolitical, more an extension of the graffitist’s desire to be seen than anything particularly anticapitalist.

KAWS’s world can be disorienting, a Bizarro version of our own populated by Donnelly’s cartoon appropriations — familiar but not, all with Xs where their eyes should be, which in the cartoon tradition signifies death, or at least a state of incapacitation. The Simpsons, Snoopy and the Smurfs are all here, floating through a fugue state that refuses to lift. Donnelly worked as an animator for a time, and his fluency in cartoons’ crisp lines and lucid coloring is clear, but his conceptual breakthrough came around 2000, during his time in Japan, where he found that cultural products like “The Simpsons” transcended language, functioning like an emotional Rosetta Stone.

The exhibition offers the opportunity to gawk at “The KAWS Album” (2005), a version of the “Simpsons” gag, itself a parody of the Beatles’ “Sgt. Pepper’s Lonely Hearts Club Band” album cover. (His painting sold at auction for nearly $15 million in 2019.) A generous reading would be its ability to say something about how the regurgitation of mass-culture images renders them meaningless. At worst, it highlights the need for a wealth tax.

“WHAT PARTY” positions Donnelly as a bridge between art, popular culture and commerce, as if those places were isolationist states and not symbiotic parts of a totalizing machine of flattened taste, where cartoons and artists are interchangeable content to be printed on everything from luxury accessories to mass-market sneakers. Donnelly has intersected at all points, from Nike and Uniqlo to Comme des Garçons and Dior (the most horrific of these are the chairs done in collaboration with Estudio Campana: plush toys molded into a modernist fever dream). His prolific participation in the art-fashion industrial complex, which lends cultural gravitas to consumer products and a rarefied level of exposure to the artist, isn’t extraneous to his practice as much as it’s the whole point. It also makes the decision to mount a KAWS exhibition less an act of courage than a sure thing.