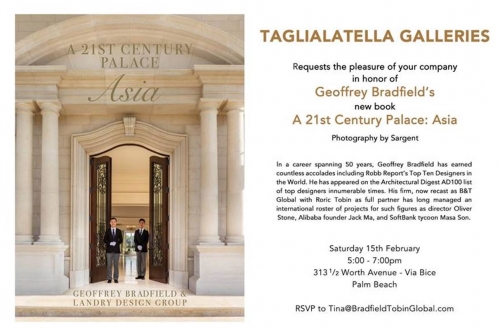 When better than Presidents’ Day weekend in South Florida … 80+ degree weather, offshore winds, rain, endless traffic jams, delays on the Middle Bridge, I-95 gridlock at all hours, helicopters hovering, motorcycle motorcades, sheriff cars at every intersection, and 45 having a night out from the Old Post House for a fundraiser in the North End at Monsorrel hosted by Nelson and Claudia Peltz.

Despite the challenges, this year’s Everglades Foundation gathering appeared sold out. In just a few minutes I met guests from Dallas, New Jersey, Naples, Denver, Dublin, and Miami, as ready to donate as rock along with Pitbull + Friends … while not as jaw dropping as Cardi B or Tyler the Creator, PB is a hybrid entertainer with a touch of Calle Ocho plus a dash of South Beach, and the Pitbullettes were Vegas-ready.

Before motoring to The Breakers, I stopped in at Taglialatella Gallery on Worth Avenue. Interior designer Geoffrey Bradfield was book signing (A 21st Century Palace Asia) and introducing his longtime associate Roric Tobin as a full partner, having recast their signature brand as B & T Global, to an SRO crowd of supporters and clients. A longtime associate designer with Bradfield’s firm, Tobin now shares equal amperage in the spotlight with Bradfield, focusing on their international roster of clients from Hollywood to Jerusalem to Mumbai.

At Friday afternoon’s Four Arts reception, I was talking about the weather with Jane Rylands, a recent South Florida émigré, who indicated it wasn’t the climate she expected. As for many years, she and her husband Philip Rylands, Ph.D., the new president and CEO of The Four Arts, have lived in Venice where he was director of the Collezione Peggy Guggenheim. 80+ degrees in February? Rain and wind in February? Welcome to the New South Florida calendar when the actual seasonal weather may be in May or October.

Courtesy of Augustus Mayhew and The New York Social Diary