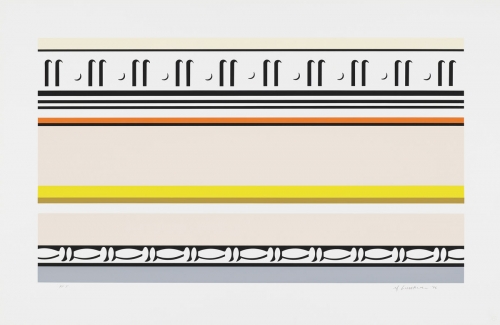 Yes, Roy Lichtenstein had a thing for moldings. Well, if we're being totally technical about it, his fascination was for a specific type of architectural superstructure made out of a series of moldings—otherwise known as entablatures.

While the artist is most closely associated with Pop-art portrayals of heightened human emotion, an upcoming Whitney Museum of American Art exhibition illustrates how Lichtenstein found intrigue and inspiration in physically stagnant elements of design. Opening September 27 and on view through 2020, "Order and Ornament: Roy Lichtenstein’s Entablatures" is a focused show of 15 works on paper and preparatory materials.

Entablatures—horizontal architectural structures found atop columns—originated in classical Greek architecture and surged in popularity during the 19th and 20th centuries. In the 1970s, Lichtenstein encountered entablatures on building façades around Wall Street and Lower Manhattan. Despite their European roots, his artistic take on them hinged on reflecting these distinctly American derivatives. In addition to entablatures' physical characteristics, they appealed to Lichtenstein as machine-made components of revivalist architecture, produced en masse in what Whitney curatorial fellow and exhibition organizer David Crane calls “a game of architectural telephone” to AD PRO.

Nevertheless, the most surprising reveal in "Order and Ornament" can be found not in the artist’s drawings but in its supporting materials—which include an early print of a Greek temple, a sketchbook, and more. “The Lichtenstein Foundation gave us a large selection of photographs that the artist had taken, several of which have never been exhibited,” explains Crane. “These [photographs] were the genesis of [Lichtenstein's] entablatures series, which was really unique for his working practice.” As opposed to how Lichtenstein referenced comic books, cartoons, and advertisements during the 1960s, in these later instances he began creating his own source material by photographing local examples of New York architecture.

That's not to say there isn't a through line between these and Lichtenstein's more well-known works. When asked what exactly that connection might be, Crane asserts that it is “cliché—anything that had been reproduced so often that it essentially becomes emptied of its original meaning.” Clearly, decorative elements that trace their roots back to the earliest moments of Western civilization qualify. But Crane also emphasizes that Lichtenstein’s romance and war comics as examples of this thematic undercurrent. “These are intense, emotional scenes," he explains of such paintings, prints, and more. "But because of how they are reproduced, they eventually lack any true feeling.”

This entablature-focused series also became an important decorative motif in the artist’s output. For example, in Lichtenstein’s five-story mural created during the 1980s for midtown Manhattan’s Equitable Building, the artist inserted a Doric column and enlarged it to a monumental scale. Summing it all up succinctly, Crane adds, “Even though 'Order and Ornament' is a small show, we want to tease out that the entablatures were not just isolated works. They were something Lichtenstein continuously had in his mind both before and after the series itself.”