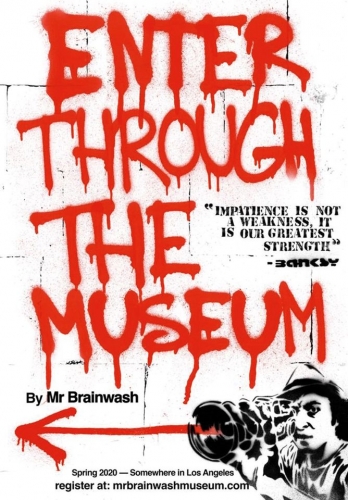 THE STREET ARTIST MR. BRAINWASH IS OPENING UP A MUSEUM DEDICATED TO HIMSELF (AND OTHER ARTISTS HE ADMIRES) IN LOS ANGELES

The pop-up space will open at the former Paley Center for Media.

Street artist Thierry Guetta, better known as Mr. Brainwash, is opening his own pop-up museum in Los Angeles. He’s renting the former Paley Center for Media in Beverly Hills, designed by architect Richard Meier in 1996, to house the temporary institution.

“It’s a dream come true; I still cannot believe it,” Guetta told the Art Newspaper. “I want to show different sides of myself—all I have kept inside for so many years. Imagine a pressure cooker, about to explode. That’s me!”

For a sense of what a Mr. Brainwash museum might look like, it’s worth recalling his 2018 pop-up at New York City’s Starrett-Lehigh building. The Instagram-ready exhibition included lots of neon lights and uplifting messaging reminding viewers to smile, as well as paintings and sculptures rife with appropriation of art-historical imagery ranging from Vincent van Gogh to Jean-Michel Basquiat. There were also displays of found objects such as suitcases, typewriters, and giant bouncy balls.

“When Mr. Brainwash decides to take over a space, it’s unbelievable the amount of attention it receives,” Brian Swarts, president of Taglialatella Galleries, which represents the artist, told Artnet News in an email. “When we opened our new gallery space in Chelsea in 2016, we gave him both floors of the gallery to do whatever he wanted—nothing but white walls. His truck showed up with over a hundred works and he spent the night splatter-painting our staircase, our staff kitchen and completely ‘Brainwashed’ the space.”

The gallery ended up extending the exhibition from one month to three in order to meet visitor demand. “I have no doubt the LA project will be even bigger,” Swarts added.

In Los Angeles, the Paley Center closed the doors to its museum earlier this month (it maintains a New York location, but is moving its archives to the Beverly Hills Public Library and its offices to LA’s Century City). Its Beverly Hills building was purchased by luxury conglomerate LVMH for $80 million in 2018. The company ultimately plans to turn the museum and two other recently acquired North Rodeo Drive properties into a hotel.

In the meantime, however, the building is outfitted with all the typical museum trappings, including a library and a gift shop. (Guetta, of course, became famous thanks to the 2010 Banksy documentary Exit Through the Gift Shop, which documented the Frenchman’s unlikely rise from would-be filmmaker to celebrity artist.)

Guetta plans to inaugurate the space with a display of his own work before showcasing other artists in solo and group shows, with loans from other institutions as well as works from Guetta’s personal collection, which includes some by Banksy. The space will likely start with a soft opening for private events, but Guetta promises at least some portion of exhibitions will be free and open to the public.