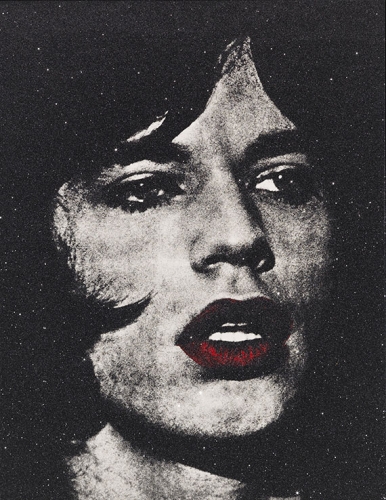 The movie "Legend" about the twin brothers Ronnie and Reggie Kray, starring Tom Hardy in both main roles, came out in 2015. [CH].
• From the series of works "Dirty Pretty Things", in which Young also portrays Marilyn Monroe and James Dean.
• Russell Young's "diamond dust" portraits of famous musicians and actors give the stars of yesteryear a glittering timelessness.
• The title refers to Reginald "Reggie" Kray (1933-2000), one of the Kray brothers who came to be known as criminals who wreaked havoc in the East End of London in the 1950s and 1960s with robberies, arson, extortion and murder.
• Two icons of music history: Young connects the portrait of the Rolling Stones singer with the song title "Reggie Kray, do you know my name" by Morrissey.
• The artist's works are part of private collections of Hollywood celebrities, as well as in important museums such as the Getty Center in Los Angeles and the Albertina in Vienna.

"The Beatles and the Rolling Stones ruled the world of pop music, Carnaby Street dominated the fashion world, and my brother and I controlled London. We were untouchable."
Ronnie Kray in his autobiography, quote from: www.diepresse.com/4903904/legend-nach-dem-mord-erst-einmal-tee.