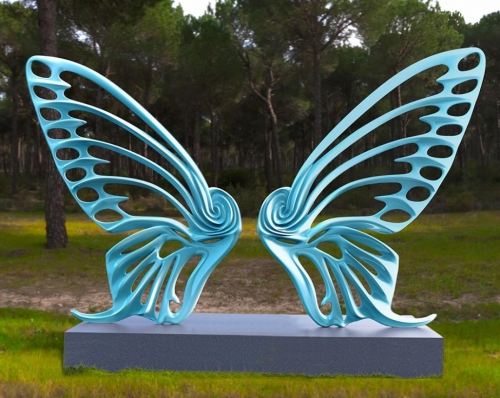 Rubem Robierb’s two-part installation by Taglialatella Galleries NY at Randall’s Island is made possible by the NYC Parks Art in the Parks program in affiliation with the Randall’s Island Park Alliance. It is an incredible honor to contribute to this program and see Robierb’s sculpture as public works.

Dream Machine II, is a tribute to the human spirit. However fragile we are in our own circumstances, despite these challenges, we remain strong, resilient, and even defiant. The wings represent the materialization of our innermost and impossible wishes, and the deep-rooted desire to have your dreams come true. As a monument, the wings take flight to carry the hopes of an increasingly challenged generation that dreams of a fair and just society. Location: Randall’s Island, near Bronx Shore Picnic Area, site 6

Robierb’s larger-than-life, multi-dimensional work Peace Makers is inspired by recent and ongoing worldwide protests for racial justice. This sculpture is a dynamic form that represents the spirit of differing cultures and races while recognizing the potential for unity in the name of progression and peace.Location: Randall’s Island by 103 Street footpath, site 83.

Rubem Robierb (1976) is a Brazilian artist who uses visual art as a way to address existential issues. For two decades, he has created visually compelling works of art whose strong symbolism and underlying message with the aim to induce an emotional response and touch on sensitive nerves of our modern-day society. The monumental proportions of his artistic symbols act to enhance the profound meanings in the subtle signs that he presents in plain sight, leaving you to see the creative process unfold before your eyes.

Growing up in Maranhão, Brazil, Robierb’s first artistic expression was in poetry and photography. His first solo show was sponsored by the Art et Partage Association in Aix de Provence in 2005 entitled Brésil Autrement, Robierb established a strong international exhibition record and as his career flourished, he settled in the United States in 2008.

In 2013 Robierb debut his first show in New York, Bullets and Butterflies, at Taglialatella Galleries, NY. New York served as his base, where he created a series of his most essential artwork collections, including Bulletfly Effect, Heart, and Power Flowers in 2015, Robierb started to explore sculpture working with dimensionality and proportion on his large-scale bullets in his Love Changes Everything collection and life-size butterfly wing paintings in his luminous Diptychs.

In 2018, Robierb furthered his sculptural work with the launch of his larger-than-life butterfly wing sculpture entitled Dream Machine, which was on view in Tribeca Park. It was great fun watching park visitors take selfies while standing between his sculptural wings.

Robierb currently lives in New York City and Miami, where he maintains a studio in South Beach. he keeps a work schedule focused on the contemporary American Society, making emphasis in the sociocultural issues that define our current times.

Rubem Robierb’s next gallery exhibition is scheduled to open on Thursday, May 6th, 2021 at Taglialatella Galleries, 229 10th Avenue at 24th Street in Chelsea, NYC.