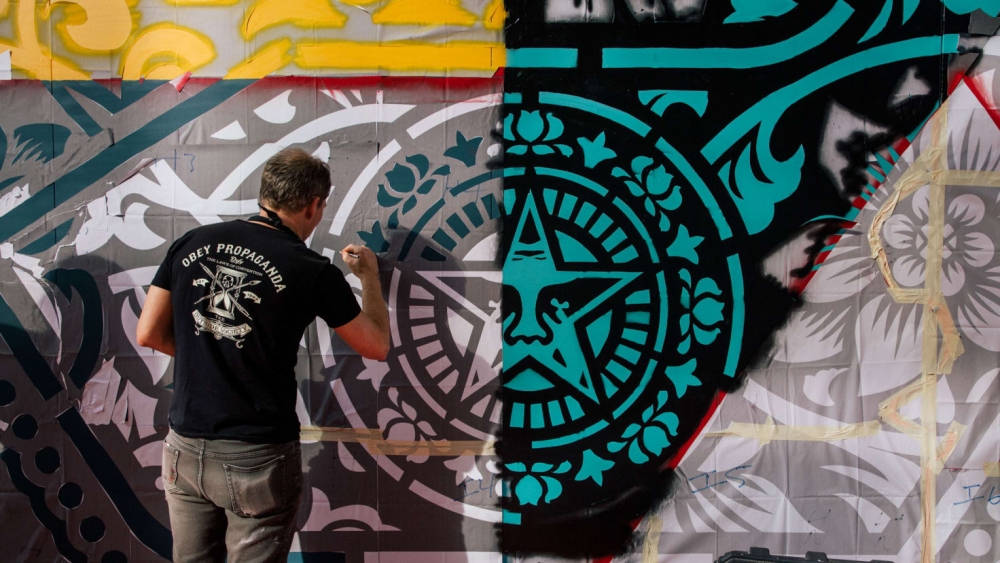 Fairey's first show in the region, "Future Mosaic," opens on March 15 at Dubai's Opera Gallery, and features 150 works - both newer pieces as well as iconic images and motifs from the artist's greater oeuvre. To mark the occasion, the artist has also painted a mural in D3, Dubai's design district.

The mural - which CNN was given an exclusive first look of - consists of two large walls facing each other. One side depicts camellia flowers and a dove, and on the opposite wall is an intricate motif of fingers gesturing a peace sign, and a fist holding a paintbrush with a flower growing out of it. For someone who admits he has little knowledge about the city, or the region, Fairey jumped at the chance to visit Dubai. "As soon as I heard that they had a gallery here, I said that's where I want to do it. I'm not an authority on Arab culture or Islam, but I'm open-minded and I'm here to learn," he said, in an interview at the gallery.

On first glance, the collaboration might seem unlikely. Fairey is a skater-turned-street artist, who took the subculture by storm with his "Andre the Giant Has a Posse" sticker campaign in 1989. In 2008, he catapulted to international fame when his "Hope" poster of then presidential candidate Barack Obama became the defining symbol of a deft election campaign. He's an activist and a vocal critic of Donald Trump, and his murals and artworks aren't known to shy away from comments on human rights abuses, climate change and female empowerment. "I pretty much put everything in this show that I would put in any show," he said, when asked if his works were censored for the exhibition. "I asked 'what about my critiques of the oil industry?' And they said well that's not the main revenue driver for the UAE anyway. And I don't do anything explicitly sexual." However, the first concept for a mural, to be located in another part of the city, was scrapped, as it was too difficult to get over the line.

The artist now considers himself a "world citizen" and an "artist of the people." He's keen to spend more time abroad, learning about other cultures and incorporating that into his work. It seems fitting that a large piece depicting a woman in a hijab is positioned near the door of his exhibition. Otherwise, the rest of the art has "universal" themes -- featuring pop culture figures and emblems of peace. But this isn't a tokenist piece to show he "gets' Islam, he says, but rather an older piece that "makes sense" for his first show in the Middle East. "In the US, there's so much Islamophobia, so people freak out when you're even trying to present a Muslim. "The cultural preconceptions get in the way of seeing everyone with equal dignity. Wherever I can, I'm trying to erode barriers. It's a handshake from afar. I'm open-minded, and I'm here to learn."