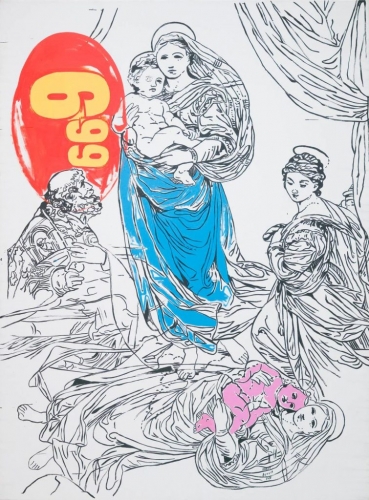 Andy Warhol is synonymous with Pop art and celebrity, Campbell’s Soup and Marilyn Monroe—but one driving force in the artist’s work that people may not know about is Warhol’s relationship to Catholicism.

A new exhibition illuminating the ways Catholic themes appear in Warhol’s work will travel to the Brooklyn Museum this fall from Pittsburgh’s Andy Warhol Museum.

“It’s not something I knew about Warhol, or that I think that most folks knew,” Brooklyn Museum curator Carmen Hermo, who organized the upcoming presentation, titled “Andy Warhol: Revelation,” told Artnet News. “I think in some ways, the art world likes to remove the influence of spirituality and religion as drivers of art production and art making in artist’s lives.”

When Hermo visited the exhibition, which is curated by José Carlos Diaz, during its Warhol Museum run”it really blew my mind,” she said. “There’s something about seeing a career-long engagement, from age 10 to the very last artworks that Warhol created. Across many different materials and technological experiments and collaborations, this theme finds its way into Warhol’s work.”

Born Andrew Warhola to Slovakian immigrants and raised in Pittsburgh’s Ruska Dolina neighborhood, the artist’s upbringing in many ways revolved around the church, which was the lifeblood of the Carpatho-Rusyn community.
The earliest artwork in the show, on loan from the Warhola family collection, is a Jesus of the Sacred figurine painted by the artist as a child. The last works are from the late series based on Leonardo da Vinci’s famous mural The Last Supper, a print of which hung in Warhol’s childhood home.

“The series has this ur-Warholian gesture of appropriating a Renaissance masterpiece, but appropriating it through its popular images,” Hermo said. “He’s approaching this iconic, well-known work through the lens of how people experience it every day in their home faith ritual traditions. It’s a Leonardo reference, but there’s also something powerful there elevating private devotion.”

For a 1984 commission from dealer Alexander Iolas—who gave Warhol his first show, in 1952—the artist made more than 100 “Last Supper Works,” including prints, hand-painted drawings, and large-scale silk screen paintings, two of which will be on view in the exhibition.
That includes the copy from the Baltimore Museum of Art, where controversial plans to auction the work were jettisoned after a widespread outcry. The piece is one of more than 30 works being added to the show for its Brooklyn iteration, including Warhol’s famous 1966 film The Chelsea Girls.

The exhibition also focuses on Warhol’s relationship with his mother, Julia Warhola, and how their faith remained a touchstone in the family over the years. Despite his hard-partying ways, Warhol lived with his mother in New York, returning home after wild nights out and praying with her each morning before heading to the Factory.
Julie Warhola was also an artist in her own right. Her calligraphy can be seen on many of her son’s early works, and her drawings of cats and angels will be included in the show. “She had a real renown, even among Warhol’s friends, of being very creative and very witty,” Hermo said. “I think of her drawings as the second ‘revelation’ in the exhibition.”

Warhol’s relationship with his faith, of course, was complicated by his sexuality as an out gay man in the pre-Stonewall era. “There’s no key passage in Warhol’s diary that says, ‘I’m struggling with my faith as a Catholic and a gay man,'” Hermo said, “but when you see the artwork and you see the gestures of Jesus and his disciples, when there are paintings bringing together a bodybuilder’s form in the loving arms of Christ, you see allusions to the two [opposing forces] existing in one person, one artist.”
“Warhol was really able to carry both things—certain times encoding his faith in the artwork, other times his queerness,” Hermo added. “Sometimes it was very overt, sometimes it was very metaphorical.”