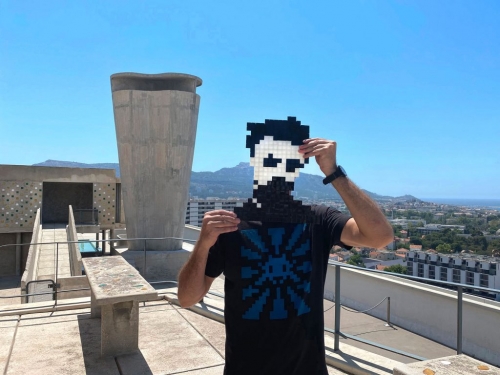 The French street artist Invader has taken over the city of Marseille in an artistic invasion that is unprecedented in scale. The artist, who is known for his mosaics inspired by ’80s video games, has installed more than 80 works around the French city as part of an ambitious new exhibition, “Invader Was Here.“

The artist spent the summer surreptitiously installing artworks of varying scales all over the French city as part of a project for the MAMO arts center, which gave him carte blanche. Since its inception, MAMO’s annual summer commission has hosted artists including Alex Israel and Daniel Buren at the converted gymnasium on top of Le Corbusier’s Cité Radieuse. But for his project, Invader transformed the space into a secret studio and complemented the site-specific temporary installation with 80 permanent mosaics around the city.

The artworks vary in side from tiny—the smallest work is just 20 centimeters—to an immense four-meter work comprised of 80 kilograms of tiles.

Installing the instantly recognizable artworks in a crowded city is no small feat for the artist with more than 700,000 followers on Instagram. Many of these are dedicated trackers of the artist, competitively capturing and sharing images of his works as they pop up on his dedicated “Flashinvaders” app.

Asked to share some of his best tricks for working undercover, the artist tells Artnet News that the important thing is staying flexible. “There is no such thing as ‘the best,'” he says. “I have plenty of ‘tricks’ because each installation is unique.”

The methods will vary depending on the size of the artwork and its materials, as well as the specific site and the season during which he is installing. Installations can take anywhere from five minutes to five hours, and the artist has developed a repertoire of installation tools and techniques. “I will do anything to reach the spots that catch my eye,” he says.

Invader installed the works throughout the French city in his signature undercover style, hitting everywhere from the tourist-friendly Calanques and Old Harbour neighborhoods to less well-off areas, including the prison des Baumettes.

The artist has created an “invasion map” to accompany the initiative. Some of these reference local heroes including the soccer player Zinedine Zidane, and the 20th century singer and actor Fernandel.