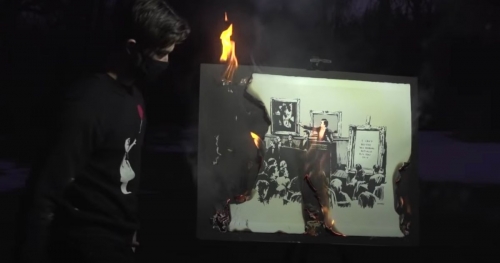 Banksy isn’t the only person publicly destroying Banksy artworks now. In the latest stunt in the craze for NFTs (Non Fungible Tokens), which have captured the imagination of many digital enthusiasts and a growing sector of the art world, a company called Injective Protocol purchased a Banksy work and converted it into an NFT—and then burned it on video.
Injective Protocol is a so-called DeFI (“decentralized finance”) platform that builds Wall Street-style derivatives using blockchain-based smart contracts. It bought Banksy’s Morons (White) (2006), depicting a crowded auction room with an ornately framed piece beside the auctioneer inscribed with the words “I can’t believe you morons actually buy this shit.”

The company bought the work at Taglialatella Galleries, in a Banksy sale this past winter, the gallery’s president, Brian Swarts, confirmed to Artnet News. CBS News reports that it paid $95,000 for the work. “Taglialatella Galleries was not part of the planning of this, but we understand the NFT medium offers unbridled, limitless possibilities for artists and galleries to experiment with creativity,” Swarts says in an email. “While we do not encourage the destruction of rare and important artwork, we do understand the importance and context of performance art in the physical world will surely translate and expand in the world of digital art and NFTs.” (The gallery is preparing its own NFT program.)

In a video posted on the BurntBanksy Twitter account and on YouTube, a representative of the company explains that, come on, they had to burn the physical piece because, if it still existed, the value would remain primarily there, rather than in the digital asset. Injective Protocol did not immediately respond to requests for comment. Banksy did not reply to emails sent to a representative. You will recall that Banksy staged the destruction of one of his own works live at an auction at Sotheby’s in 2018, long before NFTs were a thing.

In the Injective Protocol video, a masked man stands next to an easel displaying the work and explains the group’s motivations. “The goal here is to inspire,” the masked man explains. “We want to inspire technology enthusiasts and we want to inspire artists.” He places the lighter to the framed work. It seems a bit reluctant to catch fire. “Slow burn,” he observes.